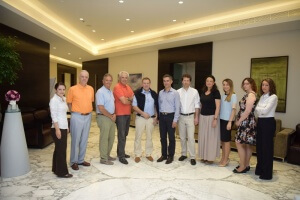 In May 2015, our 2nd International Scientific Advisory Board Meeting took place in Dubai, UAE. The main topics were the improved ImuPro concept and “Non Celiac Gluten Sensitivity” (NCGS).

In the attractive setting of Dubai, the experts discussed the introduction of the improved ImuPro concept which had taken into account the year-long experiences gained by ImuPro therapists worldwide, especially by the international experts. It was commonly approved that the changes done would certainly make the implementation of the concept easier for therapists and for patients. Lively discussed were also questions around NCGS and the worldwide growing wheat- and gluten avoidance; a matter of dispute was the point whether the elimination of dietary gluten alone is sufficient for the control of symptoms.